The following trail guide describes how to best experience the National Park’s incredible mountain scenery and pristine wilderness when limited to only two days. Two options are suggested. Firstly, the 26km to Mount Jerusalem (1459m) passing through the exceptionally beautiful pine forest of Dixons Kingdom and offering stunning summit views of thousands of alpine lakes and tarns. Or the 21km return to Solomon’s Throne and King Davids Peak (1485m). This route requires significantly steeper climbing and rewards hikers with panoramic cliff top views of the entire National Park and beyond to the Central Plateau and Cradle Mountain. If time and weather allow, both can be completed in a strenuous 30km return hike.

Walking within the Wall of Jerusalem National Park is an exposed and isolated wilderness experience. It is essential that hikers are suitably equipped for all weather conditions, even in summer months. This guide describes the ascent of either Mount Jerusalem or Solomons Throne. Accessing these higher reaches of the National Park should not be attempted during extreme weather or late in the day.

The first day’s 3 hour, 6.5km hike to Wild Dog Creek begins from the Mersey Forest Road carpark just outside of the National Park. The walker registration station is located 10 minutes in, at the National Park’s threshold. For the first 2.5km the trail steady climbs 500m up a well-defined track before reaching Trappers Hut. Built in the early 1900’s the hut was used by possum trappers and now provides hikers with emergency shelter during poor weather.

From Trappers Hut the climb gently subsides and the track winds its way past many stunning mountain tarns known as Solomon’s Jewels. Forest conditions also change with snow gums, pencil pines and alpine ferns becoming more prominent. After taking time to enjoy the scenery the track opens onto a boardwalk section of alpine undergrowth just below Wild Dog Creek, camp for the night. Three-tiered areas of camping platforms and toilets are provided at Wild Dog Creek. The toilets are located on the third and highest tier.

The second day’s hike includes the 5 hour return ascent of Mount Jerusalem – 13km, Solomons Throne – 8km or 8 hour ascent of both peaks – 17km, before retracing the first day’s hike to the carpark. Whatever the choice, the experience is incredible.

Leaving the larger packs behind at Wild Dog Creek, the hike begins with a short 600m climb to Herods Gate, the main entry point to the Walls of Jerusalem’s central basin. Nestled between King Davids Peak and Mount Ophel, the gate provides an initial glimpse into the grand scale the landscapes within the Walls. Once past the gate, Lake Salome is skirted for 500m as the track follows the base of King Davids Peak towards the middle of the basin. A short side track to the northeast leads to the Pool of Bethesda, an idyllic lake surrounded by ancient pencil pines. Once back on the main track, Damascus Gate, the saddle between the Solomons Throne and the Temple is reached after a brief climb up board walk steps. Here the track splits between Solomons Throne and Dixons Kingdom leading on to Mount Jerusalem.

Solomons Throne:
Solomons Throne lies directly above you to the west; from here it is a difficult scramble uphill. It is not recommended that hikers attempt this track in snow or stormy conditions as falls could easily occur. After climbing the base the trail edges below the western cliff face before ascending the slope via steep crevice. Below you to the southeast the pencil pine forests of Dixons Kingdom and many of the further lakes, including Lake Ball can be seen.

Once on top make your way to the northern side to the summit of Solomons Throne. From here excellent 360 degree views of the Central Plateau stretching out to Cradle Mountain and Lake St Clair are achieved. For hikers wishing to extend this route, the impressive mountain crown of King Davids Peak adjacent to you can be reached via an off-track scramble along the ridgeline. Taking an additional 2 hours this option is only suitable for experienced walkers. Return via the same track to Wild Dog Creek and further on to the carpark.

From Damascus Gate the trail continues straight ahead and meanders downhill via a stone stepped track through beautiful pencil pine forests to Dixons Kingdom. Easily regarded as some of the prettiest walking found in Tasmania, this track is an absolute pleasure to follow. Toilet facilities can be found near the small Dixons Kingdom Hut and camping is allowed here if necessary. Continuing through Dixons Kingdom the track heads north towards Mount Jerusalem. From here the climb to the summit of Mount Jerusalem is quite manageable. After passing a small alpine lake, the final ascent zigzags up the rocky slope.

In clear weather the views from the top of are fantastic, detailing thousands of the nearby alpine lakes and many of the tremendous central mountain ranges. The views back towards King Davids Peak are also impressive. Retrace your steps back to Wild Dog Creek and on to the carpark. 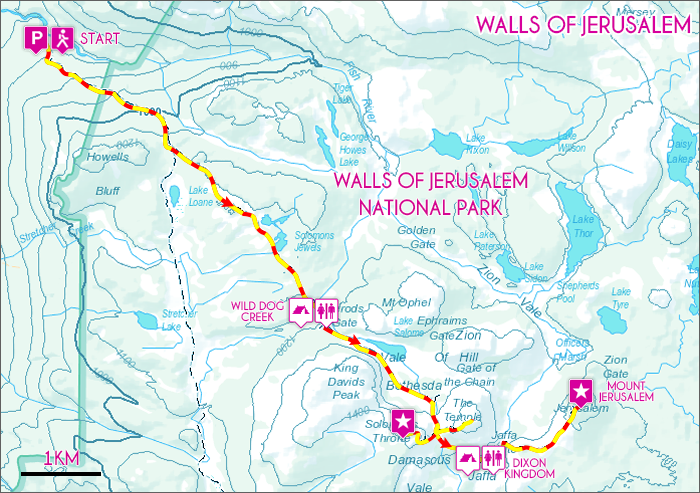